I just posted version 1.4 of Homebrew World.  You can find it here:


If you aren't familiar with this project: it's a revised version of Dungeon World that's pared down for one-shots and short-run (2-4 session) games. It features a lot of changes that would I'd include in a 2nd edition of Dungeon World were I the one in charge of it:  advantage/disadvantage (instead of +1/-2 etc), tweaks or straight-up rewrites to many of the basic moves and classes, backgrounds & drives instead of racial moves & alignment, and some significant changes to gear. The document itself has a more comprehensive list.


That last one is the biggest update. Here's how the gear system used to work. It wasn't bad, but it was a little less intuitive than I wanted.  There were a lot of hidden features, and this tries to remove those and make everything more transparent. (If you find yourself thinking "this is lifted almost straight from Blades in the Dark," you aren't wrong.)

Each playbook has a "Load" section that looks like this:

The only decision you need to make at the start of play is whether you're carrying a Light, Normal, or Heavy Load. The descriptions under each ("quick and quiet" or "weighed down, not quiet" or "noisy, slow hot, quick to tire") don't have any specific mechanical impact, but they describe the fiction. A character with a Light Load might not even need to Defy Danger to move quietly or to carefully pick their way up an unstable slope, but someone with a Normal or Heavy Load might.

Your chosen Load determines how many "diamonds" worth of gear you can be carrying. A "diamond" is basically a gear slot.
At the start of play, you can choose to define as many or as few of your diamonds as you want. During play, you can use the Have What You Need Move: 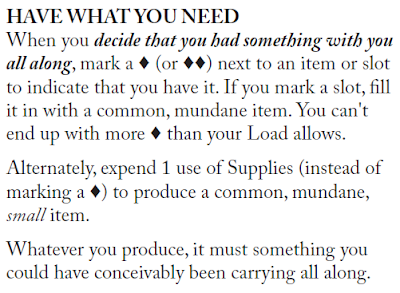 In practice, I assume that most players will take a Normal Load and then assign 2 or 3 of their diamonds, leaving 1 or 2 undefined. That's what I'd do.

Each class also starts with a knife/dagger, maybe another small item (like a holy symbol), and gets a choice of 1 special small item (a healing elixir, a pouch of coins, etc.).  You can produce more small items by using Have What You Need and expending 1 use of Supplies (see below).

A big reason for adventure games like Dungeon World (and Homebrew World) to track inventory at all is because it forces decisions. As you use up your gear and supplies, you become more prone to disaster and have to start thinking about turning back. Inventory systems also force decisions when it comes to looting treasure: how much can you take with you, and what are you willing to give up in order to do so?

Here's how loot interacts with the Load system: 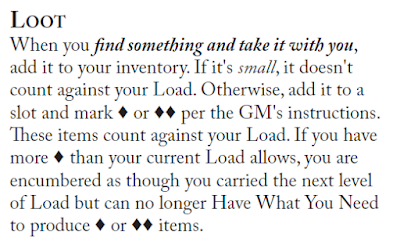 Basically: loot counts against your diamonds (gear slots).
You can use Loot to carry around more diamonds than permitted by a Heavy Load, but assume that you're basically giving the GM carte blanche to show you the downside of your gear.

Oh, and: yes, it's totally viable (and smart) to Have What You Need, give that item to another PC with empty slots, and then Loot.

"Supplies" are a 1-diamond item that come with 3 uses. They combine most of the expendable resources that you find in Dungeon World: rations, bandages, adventuring gear, etc. (In the previous versions of Homebrew World, Supplies also included ammo. That's changed now! See below.)

(The biggest differences for Supplies in this version and earlier versions of Homebrew World are that ammo is no longer subsumed by Supplies and that you don't have to expend Supplies to produce "slot" items. That's now handled by the Load system.)

In Dungeon World, "Ammo 3" is an abstraction that means you can choose "reduce your Ammo" 3 times when you Volley (or otherwise have the GM use up your resources). However, I've found that you almost always have to explain that to a new player--"no, that's not how many individual shots you have, it's an abstraction... take a look at the Volley move...").

In earlier versions of HBW, I just lumped ammo in with Supplies, and you could expend Supplies or mark "Out of ammo" on a 7-9 to Volley.

With this version, ranged weapons have a pair of "statuses" after each one, like this...
...and the 7-9 option on Volley says "Deplete your ammunition; mark the next status next to your weapon/ammo)."  I think that's a lot clearer. And if a player wants to haggle and be like "can I expend a use of Supplies to clear one of these?" then I think that's fine.

Shields are big, yo. And kind of a pain to lug around. And, frankly, they have a pretty significant impact on your effectiveness in a fight. I always found it odd that DW had them weigh as much as a sword (2 weight) and give +1 Armor.

Yes, yes, you also have a shield and that fiction is pretty damn important. But I wanted to ramp up both the "cost" of carrying a shield and their effectiveness.

Cost was easy and obvious: they're 2-diamond items. But for effectiveness... I didn't want to increase the Armor bonus (because too much Armor can easily become an issue).  So instead: they now give +1 Readiness (my term for "hold") when you Defend and get a 7+. I think that's a fair trade for taking up an extra inventory slot.

The old inventory system for Homebrew World used an "Out of..." mechanic, where you had a section for indicating what things you were out of (ammo, food, healing supplies, a few blanks) and therefore couldn't produce with Supplies.  You could also mark "Out of __" to produce a small item without having to expend Supplies.  And most things that required you to expend Supplies also let you mark "out of __" instead.

Basically, the "Out of..." mechanic gave everyone like 5 or 6 "free" uses of Supplies, but that wasn't obvious at all.  Which actually undermined the scarcity equation of the system pretty significantly.  It also required mechanisms for clearing those "Out of __" conditions.

So... it's gone.  The GM is still well within their rights to say "you land hard and hear something break in your pack... take a d6 damage, mark off 1 use of Supplies, and you can't Have What You Need to produce anything breakable or fragile."

This system intentionally puts some pretty significant limits on how much crap the PCs can be carrying around. If you have a Normal Load, you probably have a weapon, some armor, maybe 3 or 6 uses of Supplies, and like 1 undefined slot.  And those Supplies can get used up pretty darn quickly. Lantern?  That's a diamond (inventory slot).  Tinderbox?  That's a use of Supplies?  Need to Recover?  That's one more use of Supplies.  Rope?  That's your last diamond.  Now what?

This scarcity is intentional.

Remember: Homebrew World is intended to be used with one-shots or short-run games. There isn't time to slowly chip away at the party's resources. If this system is going to be meaningful, the scarcity has to become relevant quickly.

I'm honestly not 100% sure that I've hit the right balance. I think that maybe 3-uses of Supplies per diamond is too much.  But I've also tried to include an array of tempting other items in each class's Load, so that not everyone is running around with 6 Supplies.  We'll see how it goes in play.

Posted by Jeremy Strandberg at 1:47 PM