"Parley" in Stonetop and Homebrew World

In both Stonetop and Homebrew World, I've rewritten the Parley move to be at least as much of a "gather info" move as a "convince them" move. What follows is the text of the revised move and a draft of the "discussion" write-up for Stonetop.

The evolution of this move was... involved. It started with a post from Johnstone Metzger (a very sharp dude whose stuff I strongly recommend), which was sadly lost to the Google+ vortex. If you're interested, you can read through the various drafts (and surrounding discussion) here:


My gripes with the standard version of Parley boil down to:


Ultimately, what I like about the Stonetop/HBW version is that:


Also, these revisions led to a PC-v-PC approach that I think works pretty well. 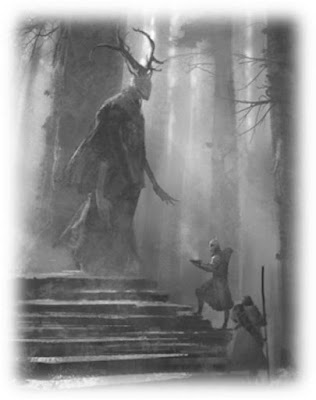 When you press or entice an NPC, say what you want them to do (or not do). If they have reason to resist, roll +CHA: on a 10+, they either do as you want or reveal the easiest way to convince them; on a 7-9, they reveal something you can do to convince them, though it’ll likely be costly, tricky, or distasteful.

This version of Parley triggers when a PC tries to convince an NPC to do something. If you, as the NPC, put up resistance and the PC persists, it’s Parley. Clarify what they want the NPC to do/not do, and challenge their approach if it doesn’t make sense. “How would she know you wanted her to do that? I think you might need to actually ask.”

On a 7-9, the NPC isn’t convinced yet but they’ll reveal a way they could be. You don’t have to make the requirement tricky, costly, or distasteful, but its more fun if you do.

Reveal how the NPC can be convinced via their words or reactions, and/or as insights that occur to the PC. It doesn’t have to be easy, or even plausible, but the revelation has to be true.
It’s okay to offer two or more alternatives on how the NPC could be convinced. “He’s waiting for a bribe; a few coppers would do it. Or you could rough him up a bit, you’re pretty sure that’d work, too.”

On a 6-, make it clear that the NPC won’t be swayed, interrupt the conversation, and/or end the scene. Alternately, have the NPC comply but with complications (treachery, overzealousness, misunderstanding, etc.). Or, the whole interaction could offend someone else, upset the social order, or otherwise generate chaos. Your threat (page XX) and homefront moves (page XX) will be golden here.

The PCs just killed a band of crinwin, only to see another set of pale, unblinking eyes staring down at them. “Ugh,” says Rhianna, “we barely took care of this lot. I try to scare them off. Parley?”

“I hoist nearest crinwin corpse by its head. Glare out at the other crinwin. Then I’ll saw its head off, start yelling, and chuck the head into the woods. And keep yelling.”

Yikes! Grim stuff, but the crinwin outnumber them and the PCs are pretty beaten-up, so I think they have reason to resist. Rhianna rolls +CHA and gets a 10+. I think that little display was plenty, so I say “They scamper right off and you’re left standing there, covered in black blood. Caradoc, how are you feeling about Rhianna right now?”

Caradoc is keeping watch with Geralt, and he pries a bit. “So, you’ve been with Rhianna’s crew for a long time, right? You ever seen anything like… like that? I’m trying to get him talking, maybe learn something about Rhianna’s past. Parley?”

I consider making him roll, but I realize that Geralt’s got no real reason to resist. “Sure, but don’t bother rolling, he’s happy to talk. Rhianna, what’s a good story for him to tell Caradoc? Like, a time you did something particularly bloody and ruthless?”

Blodwen crouches down to eye-level with the girl, keeping her distance and holding out some flatbread. “Hey. Hey, are you hungry?”

I’m sure she’s enticing the girl to do something, but I’m not sure what. “Are you, like, trying to get her to come out from the corner?”

“More like I’m trying to get her to trust me and start talking.” The girl is terrified, and definitely has cause to resist, so Blodwen rolls. She gets a 10+, and I think about this girl and look at the list of things that could convince her. I think appeasing her fears would do it.

“Her eyes lock on the flatbread, and she swallows, but then her eyes dart to Caradoc, then Rhianna, then her crew. She’s clearly terrified of the warriors. You think she’d come out and talk if they were gone.” Blodwen asks the others to step outside, and they agree.

“Cool. As soon as they leave, the girl snatches the bread and wolfs it down, staring at you. Then she gulps, and whispers ‘More?’ What do you do?”

“Sounds like you’re pressing him into giving you more coin for it, yeah? He’s definitely got reason to resist, so roll to Parley.”  On a 10+, I think I’d have Mutra ask for some more info about the sphere’s provenance, and give up the silver for the truth or a convincing lie. And on a miss, I think I’d tell the consequences and ask, saying that Mutra stonewalls at two handfuls and silver and Vahid can tell that he’ll send thugs to try and steal the sphere if he refuses.

But Vahid gets a 7-9, and so I go for something distasteful. “Fah! You’d barely get a single handful if you melted thhhis down. But I tell you what… I’ll pay two handfffuls now, and if you show my man Gunther where you found thhhis beauty, I’ll thhhrow in two more handfffuls of silver on his safffe return.” He smiles with his too-sharp teeth. “Do we havvve a deal?”


When one PC wants another PC to do something, and the other PC clearly doesn’t want to, invoke Parley. Make sure the second PC (the one being pressed or enticed) is resisting, and ask if the first PC (the one doing the pressing/enticing) wants to roll. If they roll, use the move. If they don’t roll, tell them to let it drop (and use a GM move to push things along if they don’t).

On a 7-9, the rolling player chooses between offering a reward (1 XP if the other PC does it) or forcing the other PC to either acquiesce or provide a way they could be convinced. On a 10+, both: the other PC gets XP if they do it, and they have to reveal a way to convince them if they don’t do it. The player being pressed/enticed ultimately decides what their character does.

When a player reveals how another character could convince them, it doesn’t have to be easy or even plausible, just honest. The revelation can be explicitly stated (“I’ll do this, Rhianna, but only if you promise that no one gets killed”) or described through insight (“My eyes dart to Vahid, and I think you’d realize that I won’t answer with him in the room”) or discussed player-to-player (“I think I’d agree to stay home, but only if you promise to bring back that thing’s corpse for me to study”).

On a 6-, you might turn their move back on them and let the targeted player ask how they could get the Parleying playing to do something, or offer an opportunity to the targeted player. Or you could interrupt the conversation with some other move, like introducing a threat or changing the environment. Don’t presume actions or reactions from either player, and don’t tell them how they feel.  If you’re stumped, query the table (particularly the targeted player) for ideas.

The swyn is dead, the children rescued, and they’re getting ready to head back towards Stonetop. But Vahid is refusing to go. “There’s so much here to learn, so much to discover!”

Rhianna loses it. “Dammit it, Vahid. We’re going and that’s final!” That certainly sounds like pressing him to do something (shut up and leave) but Vahid isn’t ready to cave. “You’re going to have roll,” he says. He even goes so far as to Interfere with WIS (by being stubborn as hell) and getting a 10+. Rhianna decides to act anyway, rolling Parley with disadvantage. She gets a 7-9.

Rhianna’s player is sure that Vahid won’t give this up for just 1 XP, so she picks the other option. “You’ve got to come with us, or tell me how I could convince you.”

Vahid’s player thinks for a moment, then says “Okay, okay…I’ll come. But give me a few minutes to put sanctifying marks on the entrances. And promise me that we’ll come back to explore it, and not tell anyone else. Deal?”

Posted by Jeremy Strandberg at 11:56 PM