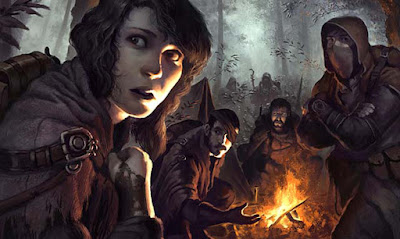 Strong personal opinion: Take Watch is a bad move. You don't need it. Dungeon World doesn't need it. I'd even go so far as to say that it is antithetical to the rest of the game.

Just to be clear, I'm talking about the bog-standard version in the original Dungeon World text. This one:

When you’re on watch and something approaches the camp roll+Wis. * On a 10+ you’re able to wake the camp and prepare a response, the camp takes +1 forward. * On a 7–9 you react just a moment too late; the camp is awake but hasn’t had time to prepare. You have weapons and armor but little else. * On a miss whatever lurks outside the campfire’s light has the drop on you.

It breaks the usual flow of the game. It doesn't add much of anything to the fiction, and what it does add presumes more than it should about how any given PC will react in every situation. (A full explanation, and what to do instead, after the break.)

Why it's a bad move

Look at how the move is triggered, and then what the move does.

When you’re on watch and something approaches the camp ...

So... it's triggered by the GM making a decision, not by a player character taking action. It's one of the only times in the game that a move works like that. It completely bypasses the usual flow of game play (establish the situation >> make a soft move >> what do you do? >> resolve).

The move doesn't help you decide whether something approaches the camp. It triggers only if you decide that something approaches the camp. Like, it assumes that you're perfectly capable of making that decision based on your prep, your sense of the situation, the precautions that the PCs have made, and the rest of the fiction-as-established. Great!  You are perfectly capable of making that decision.

* On a 10+ you’re able to wake the camp and prepare a response, the camp takes +1 forward. * On a 7–9 you react just a moment too late; the camp is awake but hasn’t had time to prepare. You have weapons and armor but little else. * On a miss whatever lurks outside the campfire’s light has the drop on you.

I guess there's something to be said for declaring that everyone in the party gets to participate in the nighttime encounter. But there's also a lot to be said for, I dunno, letting a player decide how their character reacts to something.

(Oh, also: "weapons and armor but little else." Really? Really? If the Fighter's got time to get his damn full plate on, then I think the Ranger can probably saddle up the horses or whatever. Sorry, pet peeve.) 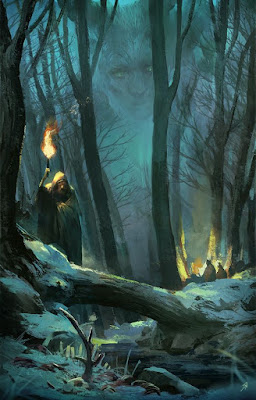 What to do instead

"But how do I decide whether the PC on watch is taken by surprise?"

The same way that you decide whether they're taken by surprise when everyone is awake and exploring a dungeon.  The same way you decide everything else.

1) Establish the situation: "Who's got 3rd watch?  Hal? Cool. Hal, what are you doing to keep awake?  Are you staying close to the fire, or what?  What's on your mind?  Cool, cool.  The others are all asleep, the forest is teeming with night noises. Moths are flickering around the campsite. It's not raining, but the air is damp and very cool."

2) Make a soft GM move, according to your principles and your agenda. Make a move that follows. Begin and end with the fiction. Be a fan of the characters. Give every monster life.

You decided that something is approaching the campsite. Well, what is it?  How is it approaching? Is it stealthy?  Is it intelligent?  Is it curious and just checking out the campsite? Is it hungry and looking for food? Is it a dangerous predator, a territorial brute, or group of locals on patrol? What does it want? What is it up to? Once you know what is approaching the camp, and how, and why... well, make a move that follows.

If it's a big loud hungry beast foraging for food at night, attracted by the PC's cooking, then you can show signs of an approaching threat. "Hal, a couple hours into your watch, you hear something moving through the brush, something... big. Snuffling and grunting, snapping twigs. It's getting closer. What do you do?"

If it's a group of, say, kuo-toa who have slipped out onto shore to steal the PCs' boats while they sleep, then you might hint at more than meets the eye (not a standard DW GM move, but one I use in Stonetop, and it's super useful). "Hal, a couple hours into your watch, you hear a... clunk? And maybe a soft scraping noise. A little ways a way, down by the lake, maybe? What do you do?"

If it's a stealthy choker creeping up on the PC, attempting to snag them and drag them off into the night, then you might gauge how cautious the PC is being. If they're sitting near the fire a sharpening their ax, you might jump straight to putting them in a spot. "Hal, a couple hours into your watch, and you've sharpened your ax, both your knives, you arrow heads, and you're starting on you sword. There's like, this moment where all the night noises in woods go silent, just the pop and hiss of campfire, and like CRAP something snakes out of the darkness behind you and clamps over your face. You've barely manage to get a hand up in front of your throat before something like a thick rubbery rope twists around it, trying to choke you, what do you do?"  (If the PC had described being a bit more alert, then maybe I would have just hinted at more than meets the eye and asked what they did after the forest went silent.)

If you showed signs of an approaching threat, then maybe they rouse the whole party and make a lot of noise. Maybe they quietly wake the Ranger, finger over their lips in a shh noise, and the two of them go out to investigate.  Maybe they lay an ambush for whatever's coming. Maybe they Spout Lore about the beasts that roam these woods. Whatever.

If you put them in a spot, then they're likely to end up Defying Danger no matter what they do, or maybe Hacking & Slashing, or using some other move.

Whatever they do: if it triggers a move, resolve the move. If they ignored a threat or danger that you warned them about, make a hard move. If they do something else, say what happens, and go back to step 1. Repeat.

See? No need for Take Watch.

Okay, fine, you're not a bad person. But I challenge you to run a few sessions without the move, and see if you really miss it.

Also, ask yourself whether you're actually using the move as it's written. I suspect that a lot of GMs use it to determine what approaches the camp at night. Like, if the PC on watch gets a 10+, then whatever is approaching must be noisy and/or not approaching very quickly. On a 7-9, maybe it's something noisy but moving quickly, like raiders or some charging wisents.  On a 6-, it's something stealthy.  If that's how you use it, then I'd really challenge you try a few sessions without the move.

If you're looking a way to disclaim decision-making about what happens at night, try using the Die of Fate (have a PC roll a d6, low is bad, high is good). Maybe come up with some preset results as part of your prep, like those random encounter tables the OSR is all hype about. Here's the general advice I give in Stonetop (along with an example, and a bonus take on dealing with deprivation). 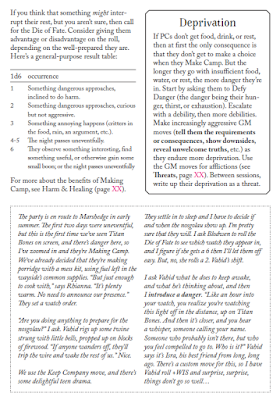 Posted by Jeremy Strandberg at 11:03 PM