Over on the Dungeon World Discord, Razorkiss asked this interesting question:

Imagine you're trying to model scary Mythos tomes in DungeonWorld. Y'know, we're talking about The Necronomicon here. You want to create a custom move that represents the dangers of reading it, the dangers of gaining knowledge at the expense of sanity. I feel like the first instinct would be that this is a +WIS move, because, y'know, the Will save and all of its attendant baggage. But... is that the way you'd really want to go? It's basically saying, "Y'know, Wizard, you'd think you'd be the person who would be all over this custom move, but it turns out your buddies the Ranger, Druid, and Cleric are better-suited for this job..." 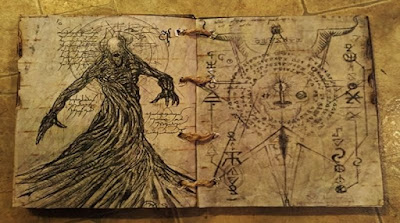 When you read the obviously evil book, roll +???

Queue discussion about whether it'd be an INT roll or CHA roll or whatever.

And my first instinct was to treat it the way I treat major arcana in Stonetop.

(discussion after the break)

In Stonetop, there are (to date) 18 "major arcana".  They're potent magical items (or close enough) that the PCs can unlock over time. The details vary a lot from arcanum to arcanum, but the general structure is:

Basically, the major arcana end up being little player-controlled grim portents. It's a delightful experience in play.
With that general structure, there's a lot of room to play. For example, here's the Azure Hand: 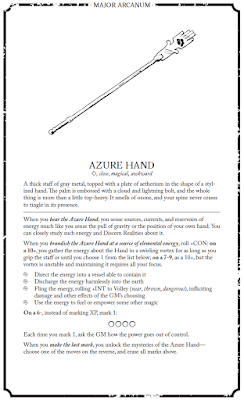 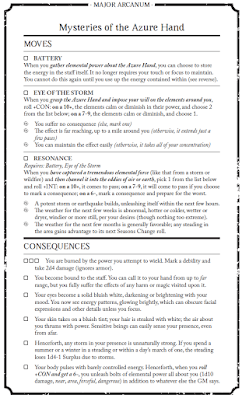 But here's a very different sort of major arcana, the Blood-Quenched Sword: 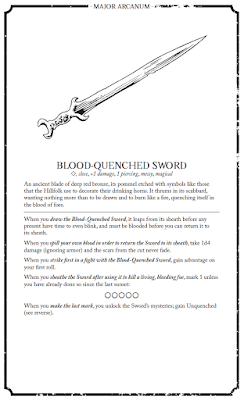 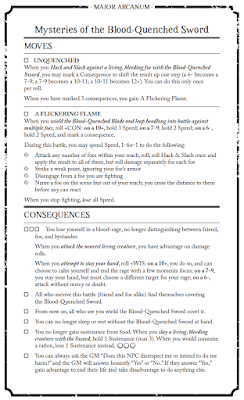 Again, you unlock the mysteries by using this arcana, but with this one, it's generally by doing it successfully (albeit bloodily). But that gets you just the first advanced move (Unquenched), which requires marking Consequences to use. And to get the second move (A Flickering Flame), you have to accumulate 3 Consequences.

Point being: it's a flexible structure, and a great way to reflect the slow (or not-so-slow) corruption that potent magical items can inflict on a PC. So if you're looking for a way to model "the dangers of gaining knowledge at the expense of sanity," this seems like a great fit.

Going back to Razorkiss's initial question, I'm picturing a "basic" power that involves that reading through the book and getting flashes of insight and deeper understanding. That seems like an INT check to me, not WIS. Meanwhile, the growing insight itself should start messing with the character right away. And it seems like, in the literature that spawns these types of books, there's always a risk of unleashing terrible, uncontrolled power. 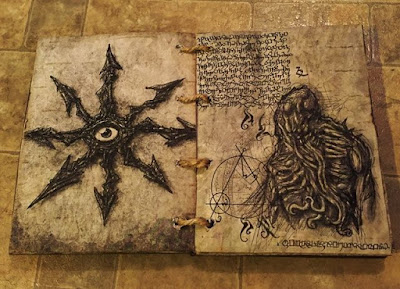 So, here's our starting set of moves:

When you spend hours and hours pouring through the cryptic text and perusing the unsettling engravings, roll +INT. On a 10+, both. On a 7-9, pick 1:

On a 6-, mark XP and tell the GM one of the following:

When you cast a spell learned from the Nhing Codex, roll +INT. On a 10+, the spell works as described. On a 7-9, the spell works, but choose 1 from the list below. On a 6-, mark a consequence in addition to whatever the GM says.

So we've got a general move that can prompt a GM info dump and/or get you closer to unlocking some spells, while also making you less likely to have a pleasant sleep. Oh, and you can accidentally unleash evil on the world.

In order to make this something people actually want to use, we need to make the spells that it provides pretty darn powerful. And the Consequences should be all about the corruption (mental and physical) that comes from trucking with these powers.

Mysteries of the Nhing Codex

[ ] Twist the Senses: Name someone and hold 3 Sway over them. Spend 1 Sway to twist their senses, making them perceive something that is not true.

[ ] Grasping Darkness: Start chanting and point at a place of shadows; a mass of inky black tentacles (15 HP, 2 armor) bursts forth. They deal d8+1 damage (reach, area, grabby, forceful) to anything they can grasp, but they last only as long as you keep chanting.

[ ] Baleful Utterance: Speak a foul word. One object in your presence shatters, and the ears of all who hear the word bleed (1d4 damage, ignores armor, temporarily deafened).

[ ] Vox Umbra: Grasp the voice of someone who is speaking with an inky tendril. The tendril slithers down their throat. While this spell persists, they cannot speak of their own accord, and instead say whatever you wish, black bile pouring from their mouth as they do so. The spell ends if you cast another spell.

[ ] Night Falls: Snap your fingers. All light sources in near range are snuffed out.

[ ] Pour Forth: Name someone. They spend the next few minutes vomiting vile black fluid, incapable of doing much more than staggering about or crawling.

[ ] Flow Through Me: The Outer Darkness twists your body in a useful, impossible way (describe it). You lose 1d6 hit points, and the effect ends as soon as you roll a miss.

[ ] Darksome Servant: Call up a lesser being of the Outer Darkness. Name one ability that you wish it to possess, and one task you wish it to perform. The GM will tell you want it wants. Pay its cost and it will perform you task. Refuse, and it runs free.

[ ] Dismissal: Name a thing of the Outer Darkness in your presence. It is banished back from whence it came.

[ ] No Hiding from the Darkness: Look into someone's eyes and ask them a question. They must answer you, wholly and truthfully. They will forever after suffer from nightmares.

[ ] Night Puppet: A black tendril of your power crawls from your mouth and into a dead thing, animating it. Spend 1 to 10 HP; your puppet has as many HP as you spend.

[ ] Your drive/alignment becomes "Upset another with your compulsive behaviors."

[ ] Henceforth, anyone who Makes Camp in your presence suffers from disturbing dreams. Ask them to tell you about them.

[ ] Your eyes become inky orbs of darkness; you can see in even absolute darkness, but nearly blinded by full daylight.

[ ] Your blood is black and foul-smelling; you are immune to poisons, but heal only half the usual amount of HP.

[ ] When you look into someone's eyes, you can ask their player/the GM "What fills you with fear or disgust?" and get an honest answer.

[ ] [ ] [ ]  One of the Priest-Kings of Ancient Nhing demands a task of you. Until you complete it, you have disadvantage to cast a codex spell.

[ ] You hear the whispers of the Outer Dark. When they compel you to act, mark XP if you do as bidden. If you resist, roll +WIS; on a 10+, your will is your own; on a 7-9, it takes time or aid from a friend to shake off the compulsion; on a 6-, do as they wish or do something drastic, right now, to drown out the whispers. 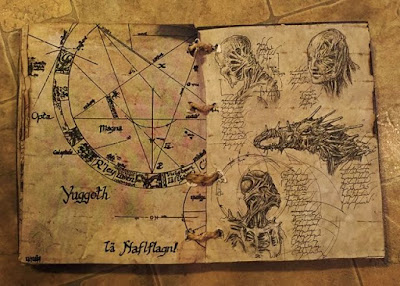 The biggest critique I have is that I couldn't get this to fit on the 2-sided half-sheets that I use for the other Stonetop major arcana. I'd have to prune the spell list quite a bit and probably crunch up the language on the "front" page as well.
The second critique is that the Consequences feel more about corrupting the individual PC with the power they're using and less about the cost this has on their sanity--which is what originally prompted me to start this whole exercise.  I'm not sure that it's actually a problem, as the initial moves for studying the book and Making Camp with Gnosis gets at a lot of the mental toll of digging into the book.
The final critique, then, is that the Consequences are sufficiently bad. Like, it feels like there should be ~2 of them that are, like, "oh, you've opened a portal to the Outer Darkness and let All The Bad Things in."  But, again, maybe that doesn't need to be part of the arcana itself. The Things in the Outer Darkness and the Priest-Kings of Ancient Nhing sure seem like they'd be a set of fronts/dangers with an impending doom and grim portents all their own, and the Consequences would then probably rope the PC into helping those grim portents along.

Posted by Jeremy Strandberg at 12:44 AM